Our second day trip to bustling Shalimar Garden and the unforgettable Shikara ride in the Dal Lake ended perfectly. With our third day trip to Gulmarg, we started early as the road trip from Srinagar to Gulmarg takes around an hour and a half. It is one of the most scenic drives so far we have seen in Kashmir. 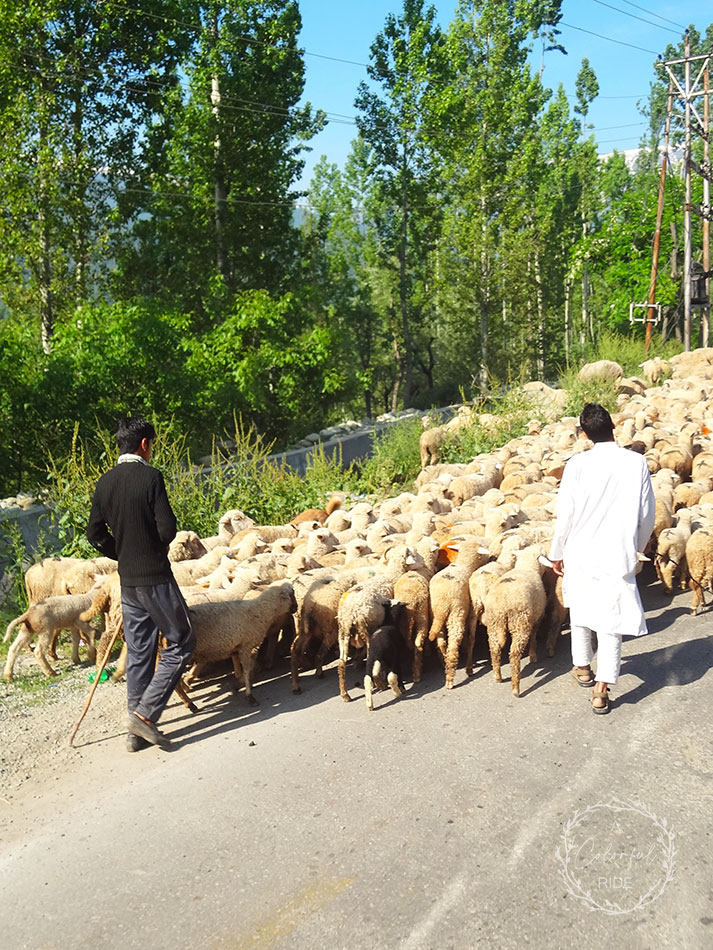 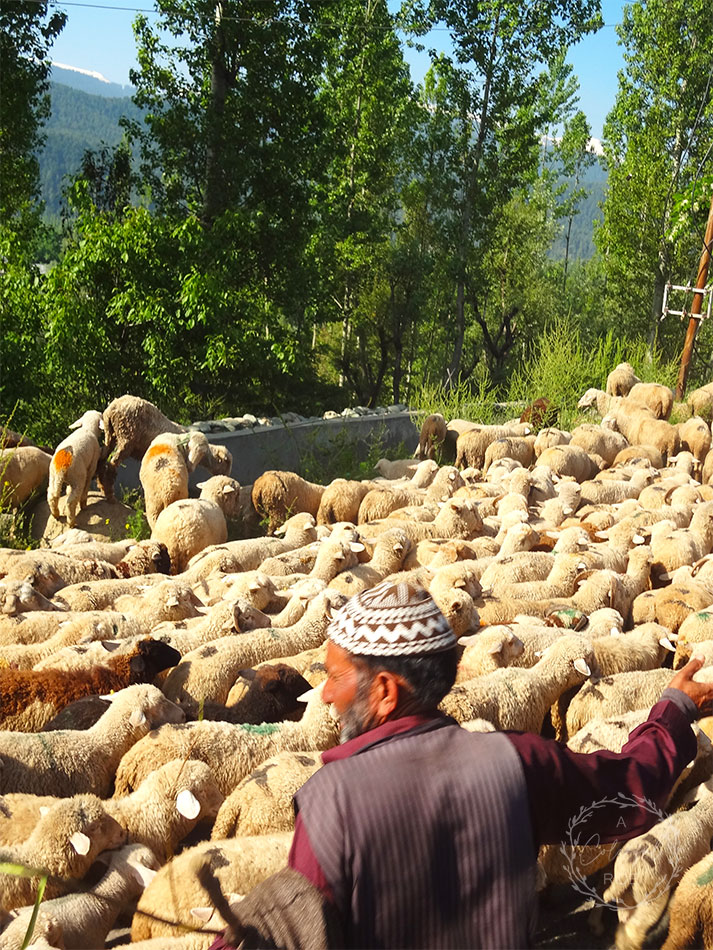 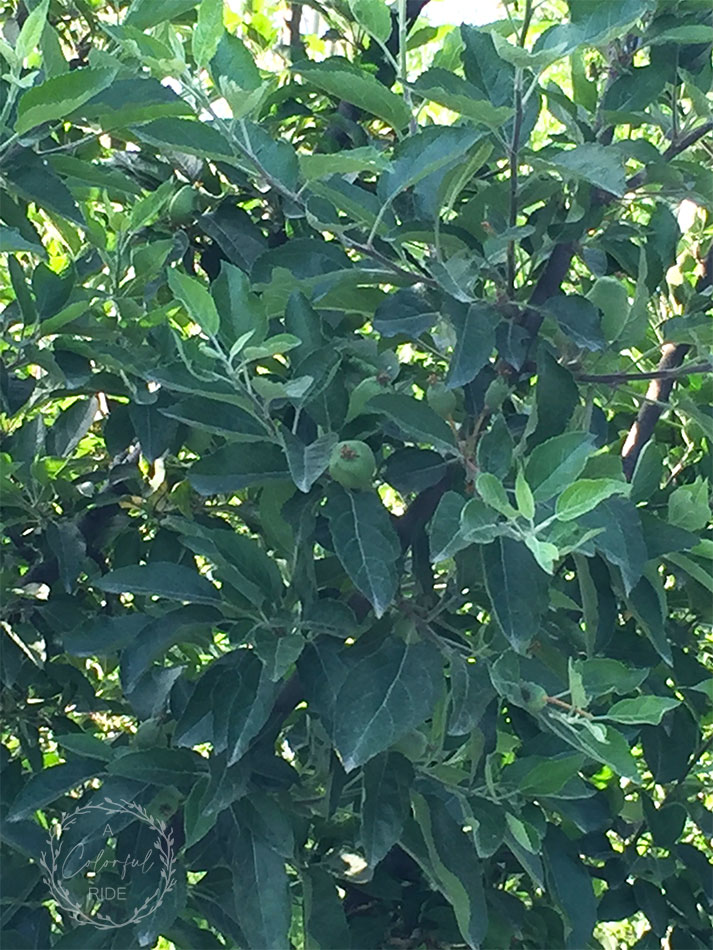 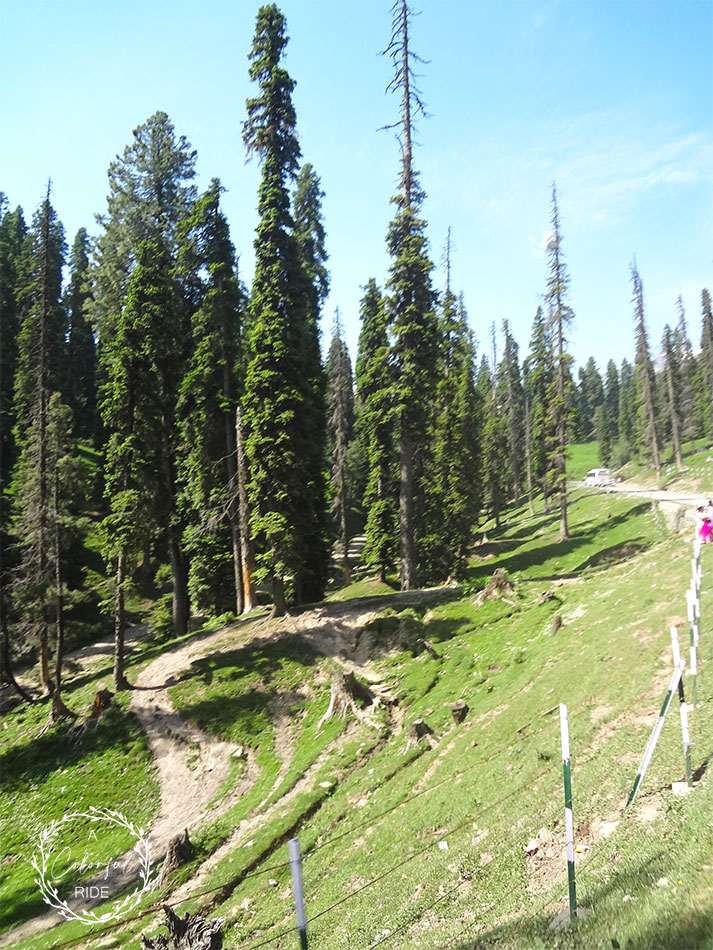 We took the Tangmarg route to reach Gulmarg. The road trip is beautiful and picturesque with lush meadows grazed by unfettered sheep, cedars and pine trees lined up the hill, snow-clad mountains arising at the horizon, unending plump-sheep flocks blocking the road and an occasional stop at apple orchards. Such a whimsical charm, that it attracts people across borders to flock all-round the year! 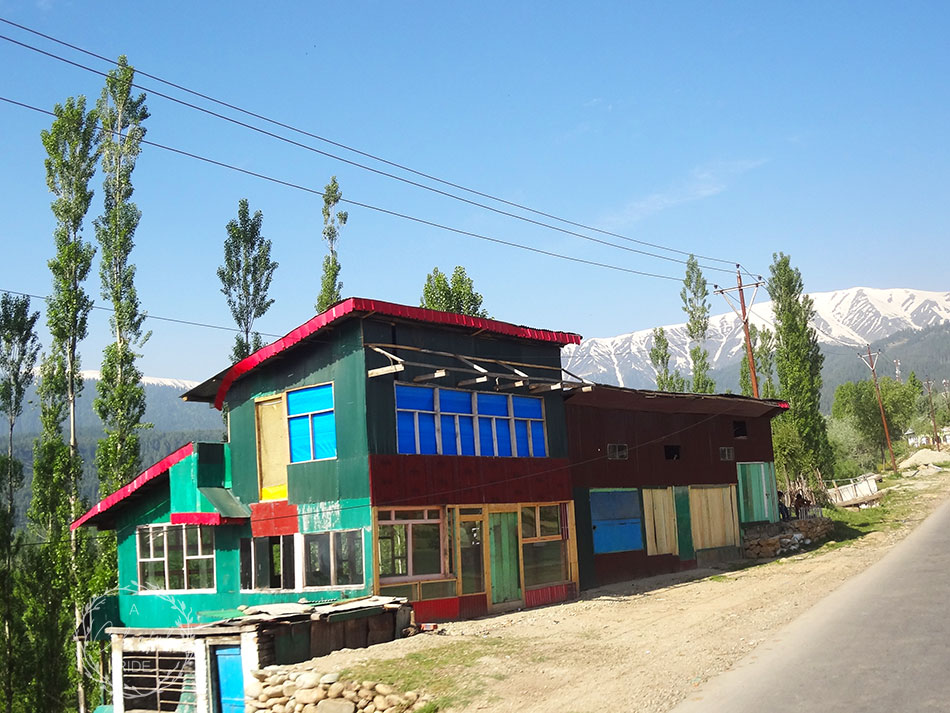 As winter arrives, Gulmarg gets white-washed in snowy slopes and makes Asia’s best skiing destination, offering a spectacular skiing experience.  Gulmarg, a hill station of Jammu & Kashmir in the Pir Panjal Range of the western Himalayas perched at an altitude of 8,690 Ft has no dearth for snow adventures.  From skiing to surfing, it brings out the child in you who loves watching the ‘Home Alone’ series just for the glistening snow. The yearning to build a snowman in the snow gets fulfilled! We don’t need to go anywhere, everything is in our home. We only need to explore!

All passing vehicles stop at Gulmarg bus stand. By the time we reached there, it was almost 10:40 in the morning; we got down from the bus and stood amidst the rabble of ponies and buzzing pony hawkers… Either, you’ll have to walk less than a kilometre to the Gondola station or you can hire a pony until the station. 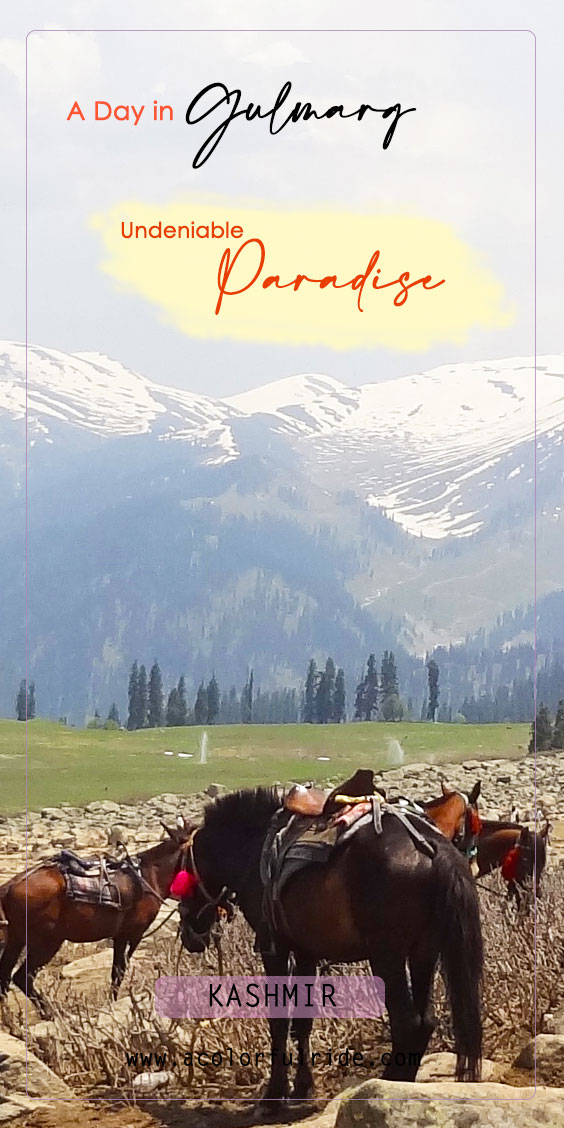 The biggest attraction in Gulmarg is the gondola ride, the second tallest gondola in the world. You can also book tickets online to avoid waiting in the long queues. The ride comprises Phase 1 and Phase 2. Make sure to book for both the phases. It would be a splendid stupendous ride. We missed it!

At the bus stand, you’re more likely to fall for the scams. The pony-hawker scam is popular among those. The pony hawkers scammed us for the pony ride! Here are tell-tale signs…  They’ll tell you that the Gondola station is 3 KM from here and frighten you that you’ll not get through the long queue. They would suggest you take a pony ride through the mountains to reach phase 1. Besides, charging a fee of ₹ 1000 and they’ll tell you that it’s a fixed price set by J&K Govt.

Until we reached Phase 1, we didn’t know that the entire group of 40 was scammed. The price for a pony ride is just ₹ 500 for to and fro. 🙁

Coming back to the pony ride, one boy per two ponies was allocated and he is only 14. The boy who took us on the pony ride was so gentle and was blushing as we kept talking to him. As you strode through the mountains happily, crossing the alpine forests and thick blanketed lush meadows where tiny pink and blue-colored flowers unfettered like starry skies, no wonder Gulmarg is rightly called the ‘Meadow of Flowers’. You can also spot colorful little daisies, tiny wild berries, and bright yellow daffodils. 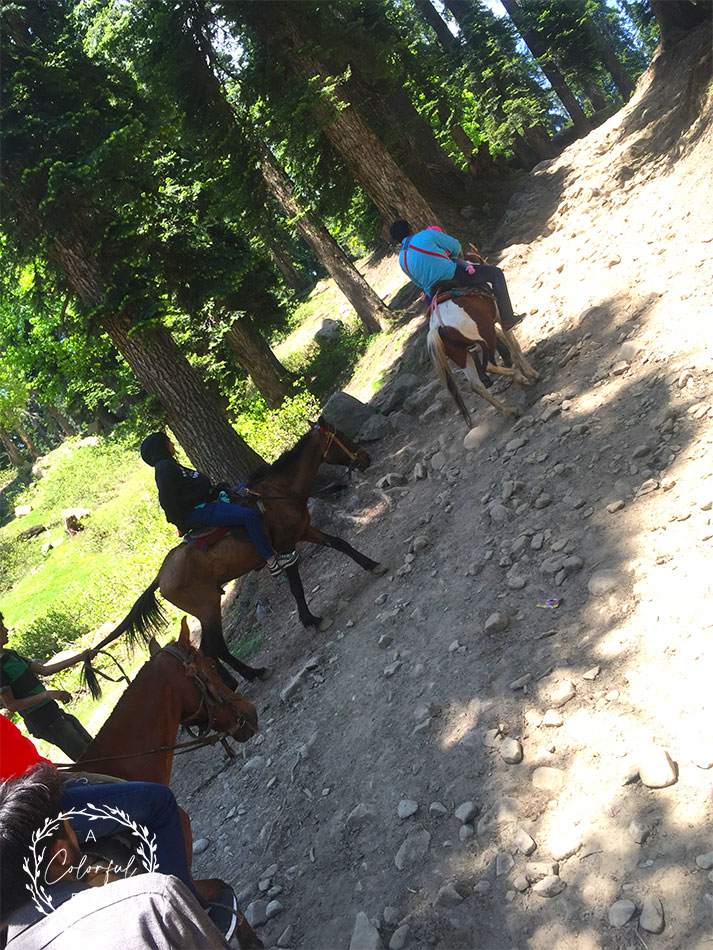 The scariest part of the ride was when the fellow horses turned wild and began to fight with each other. It threw my friend and a little girl off the saddle. Luckily, none of them got seriously injured except for some bruises on the elbows.  I was frozen in fear! Bewildered, I began to look at my horse and patted his broad neck to stay calm. By the end of the two hour journey, you’ll master the ride. 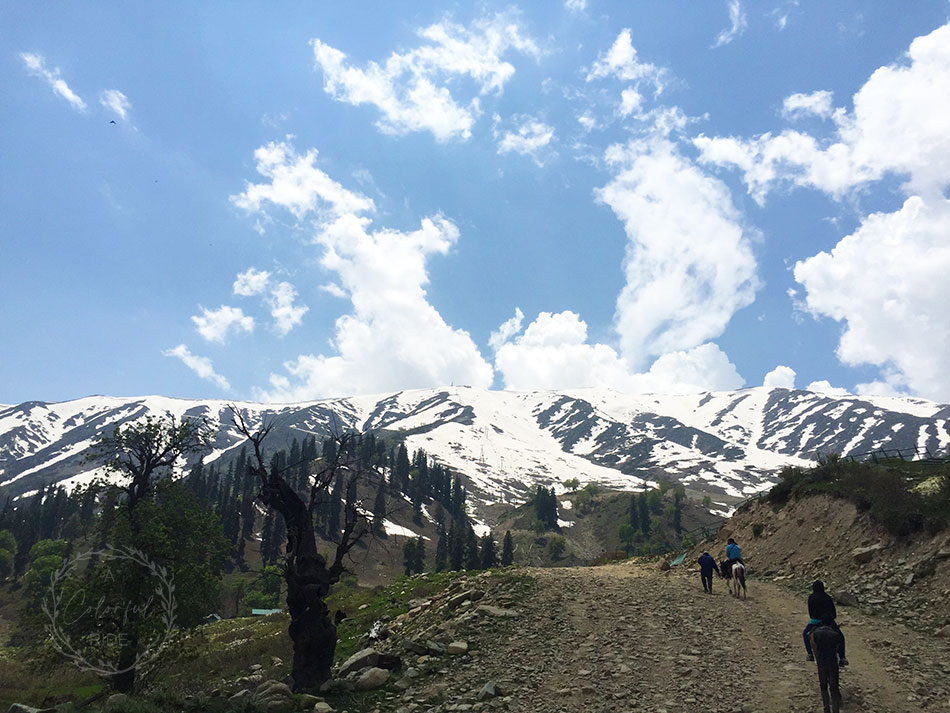 Nevertheless, it was a rough bumpy ride through the mountains and it hurts a lot. My first horse riding experience turned sour and I wouldn’t pick a horse ride anymore anywhere! 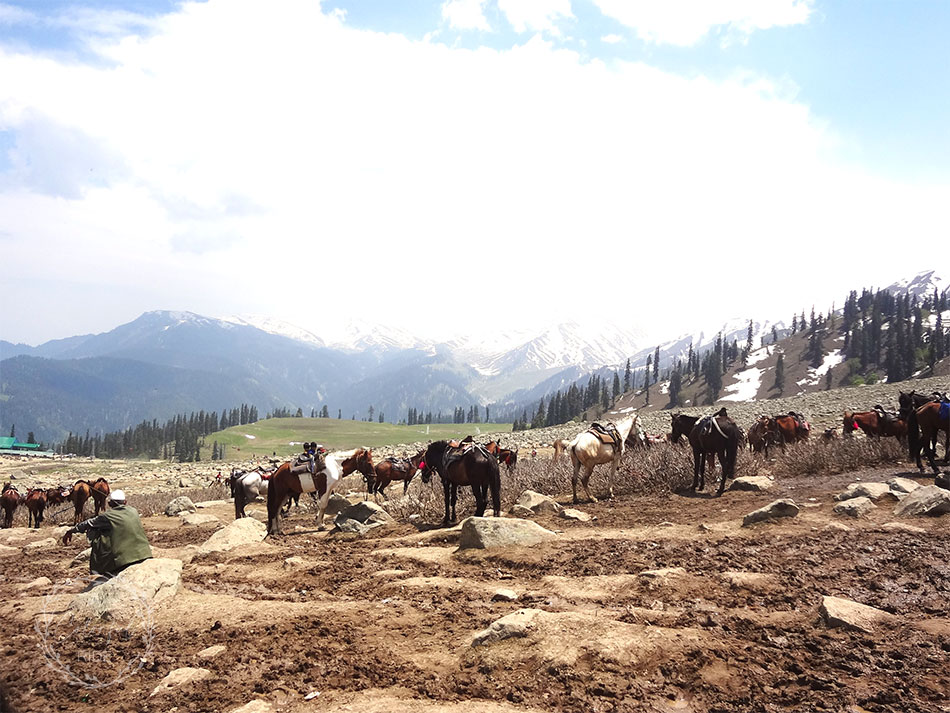 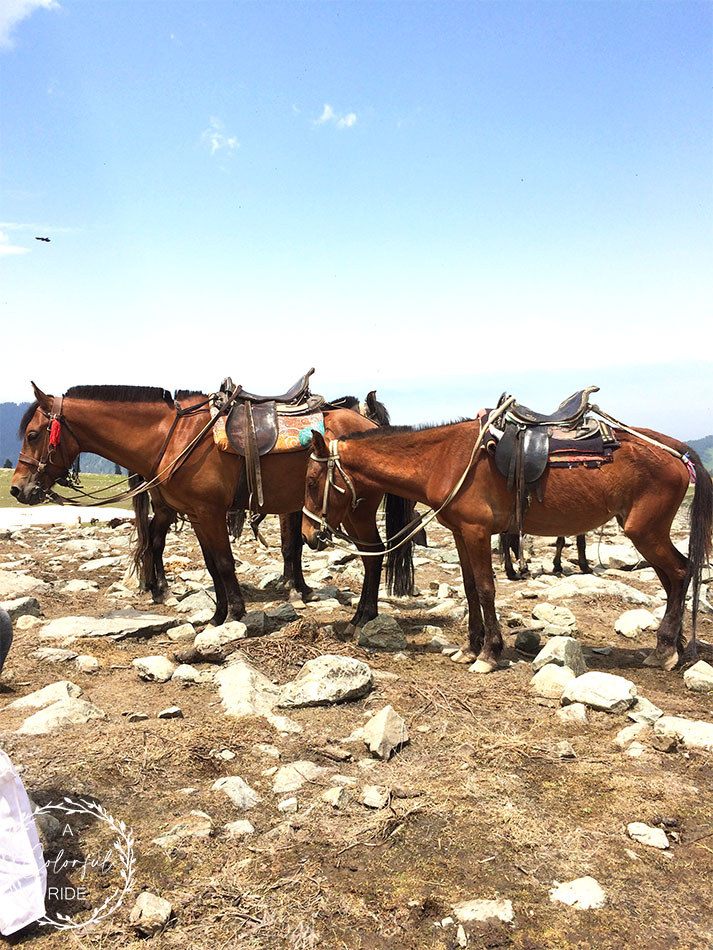 Our ride ends at Kongdoori Phase 1. We got disconnected here. A part of us were taken along the other side of the valley affirming it was a shortcut. The panoramic view of the beautiful mountain valley with cedar and pines dotted along the foothills makes it a pretty post-card picture. As the snow appears closer with every step, it makes you jump with glee and a happy smiling face. 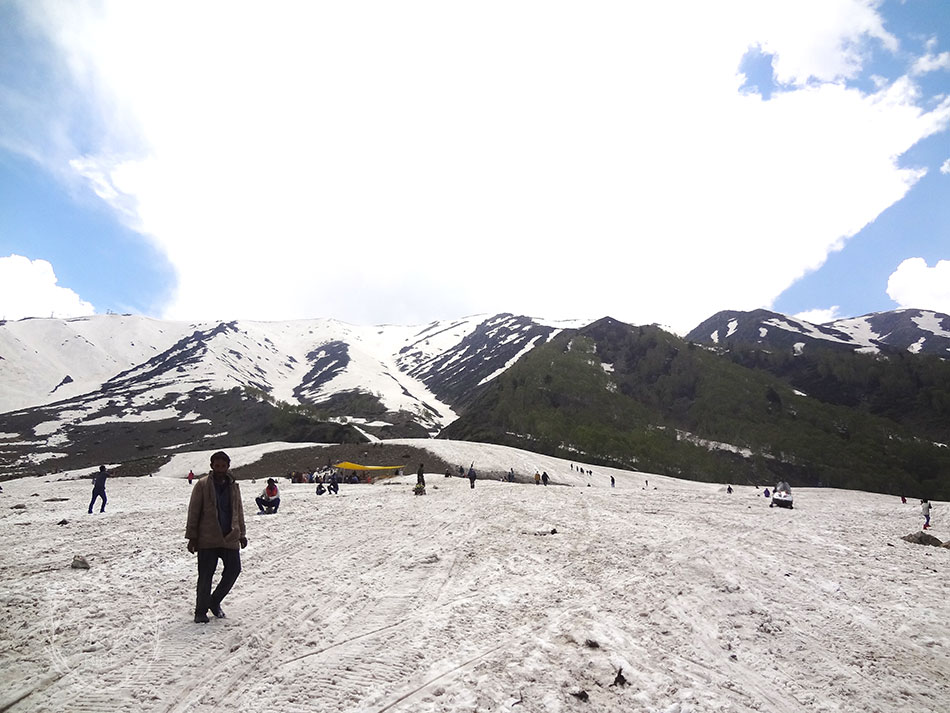 The dream of a frozen enchanted world was shattered as the foot-marks left the snow discolored and dirty. In the off-season, you wouldn’t get to see scenic pristine snow. Sadly, we didn’t bring our snow-boots either. As the snow seeped through our belly shoes made our socks unpleasantly wet, we couldn’t bear the cold for more than a minute. When the toes started to sting in the cold, we would run to the small rocks. We enjoyed ourselves a lot in the snow by sipping a hot chai.

If you would like to take a slide in the sleds, please be courteous enough to walk up the hill. Here’s our little snowman… 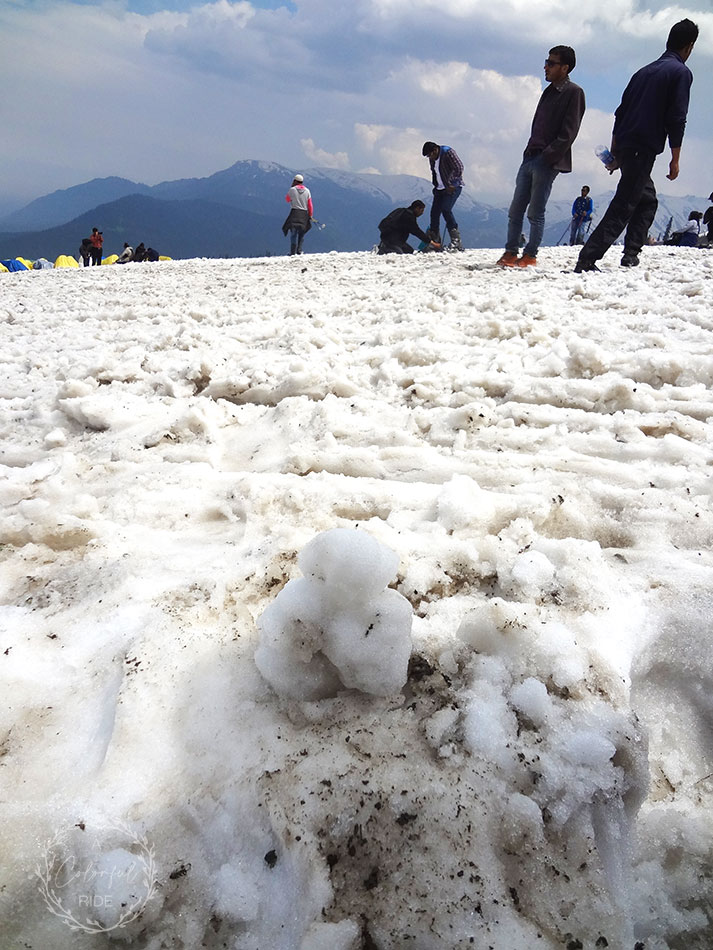 There were small shops under the tent selling Maggi noodles and chai.  We returned to the place where our ponies halted after an hour and a half. We didn’t go to Phase 2. Yet another, two hours of bumpy ride down the hill on the pony, we reached the bus stand around 5 pm.

Around 7 pm, we reached the Kashmir Market & was crowded and you couldn’t miss the sight of soldiers standing at every 10 Ft. distances. Do not miss to taste the rug-sized puris, kebabs and pickled vegetables. 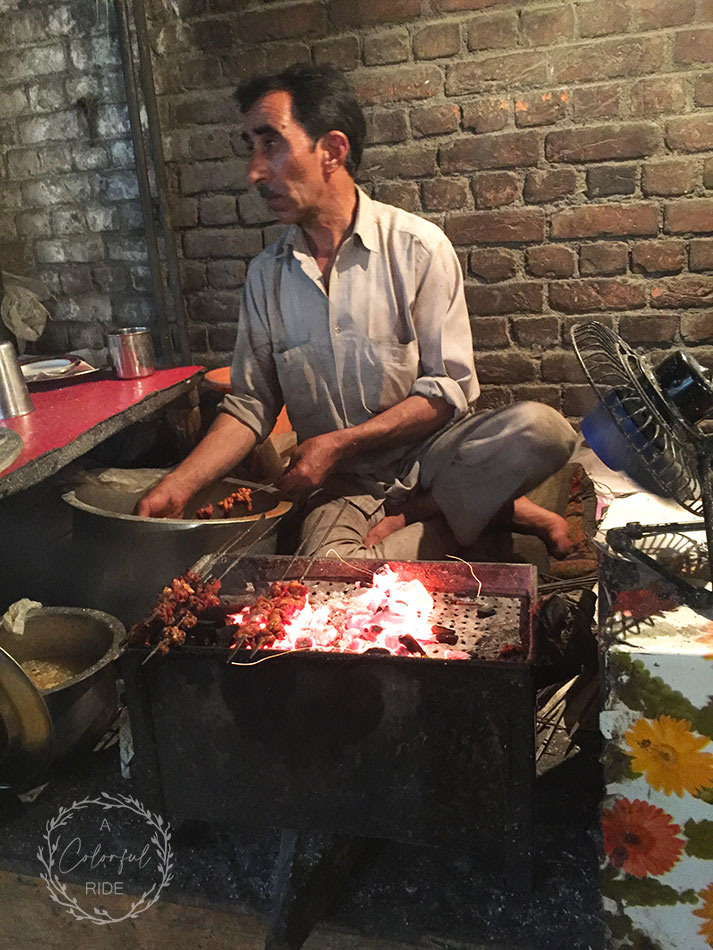 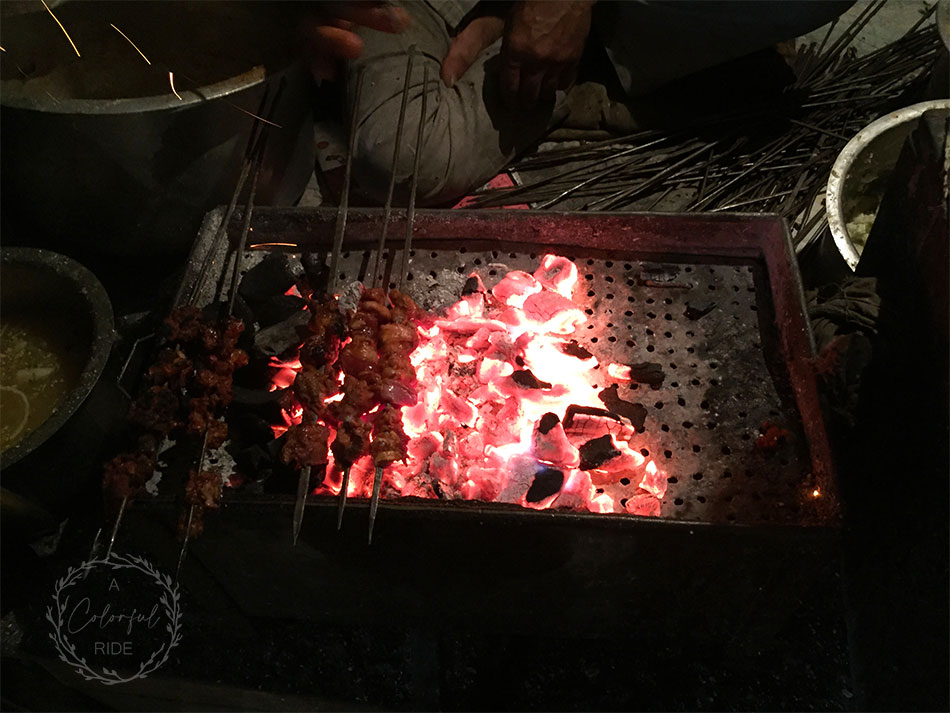 By 9 PM, when we reached the hotel and we were informed that there was a militants attack happened in the market that night after we had left the place. It was so scary!! He further frightened us that curfew would be implemented and Srinagar might be closed; and, we will have to stay until it’s lifted. We were worried about the plans and pre-bookings that we made for our trip to Punjab. 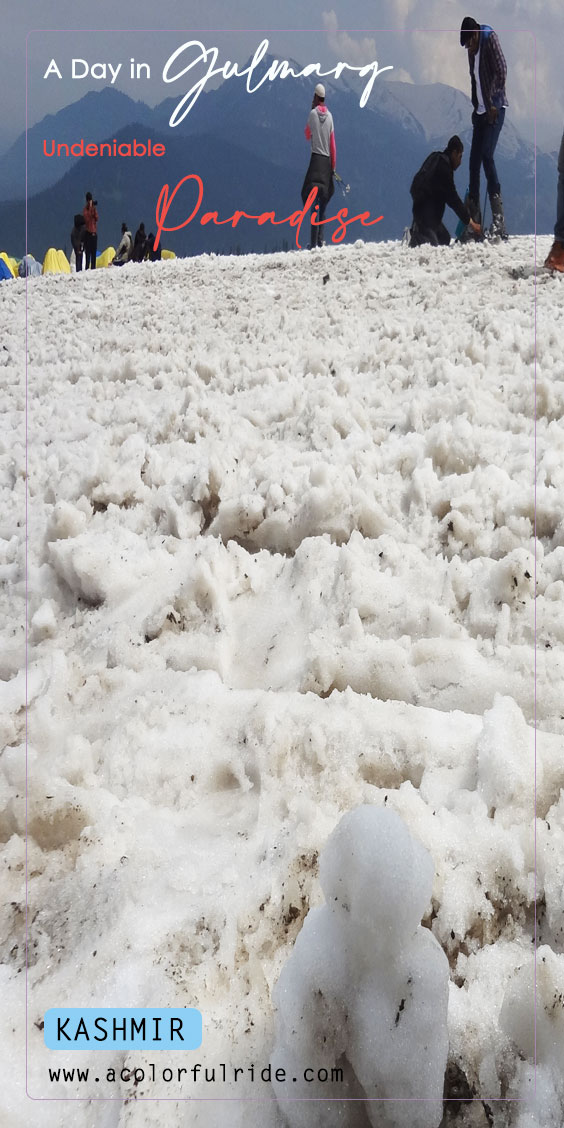 Perhaps, it was a sheer luck that curfew wasn’t implemented and we left Srinagar early in the morning.

Are you looking for places to visit in Kashmir in 2 days?

Take a look here: Places to visit in Kashmir in 2 days

PLACES TO VISIT IN KASHMIR IN 2 DAYS

IF IT’S PUNE, IT HAS TO BE SHIRDI!