PARASAILING IN GOA AT CANDOLIM BEACH

Padmanabhapuram palace is considered as the Mystique marvel of Kerala Architecture.

Drizzling rain falling on the asbestos roof of the balcony woke me up from the nightmare. It was 6 AM and The Cock was crowing at its best, giving me a flavor of a rural village with the aroma of filtered coffee tantalizing in the air… Sunrays behind the mountain spangled the skyline affirmed the rain wouldn’t spoil sport our second day trip.
The first day of our trip flew with church hoping spree and filled with visit to some of the prominent churches in and around Kanyakumari.

The pristine beaches of the fishing town of Uvari offer serenity, besides the renowned Kappal Matha Church and Uvari Anthoniyar Church. The radiant façade of Punniyavalanpuram Velankanni church, the lost church of Athisaya Manal Matha and the miraculous ThiruKalyana Matha Shrine behold the perfect goodness of God! Mesmerizing the beauty of Manapad with blue lagoons and natural aquifers is really splendid…

We started for Padmanabhapuram Palace from Nagercoil around 9 AM with all the kids and with our undeniably scrumptious meal for lunch. Recalling our earlier trip here, it’s the most skipped place due to time constraints. Whenever I pick the palace to visit, someone will pick up the beach. Finally, everyone will end up there… And, today, I will not miss it!! 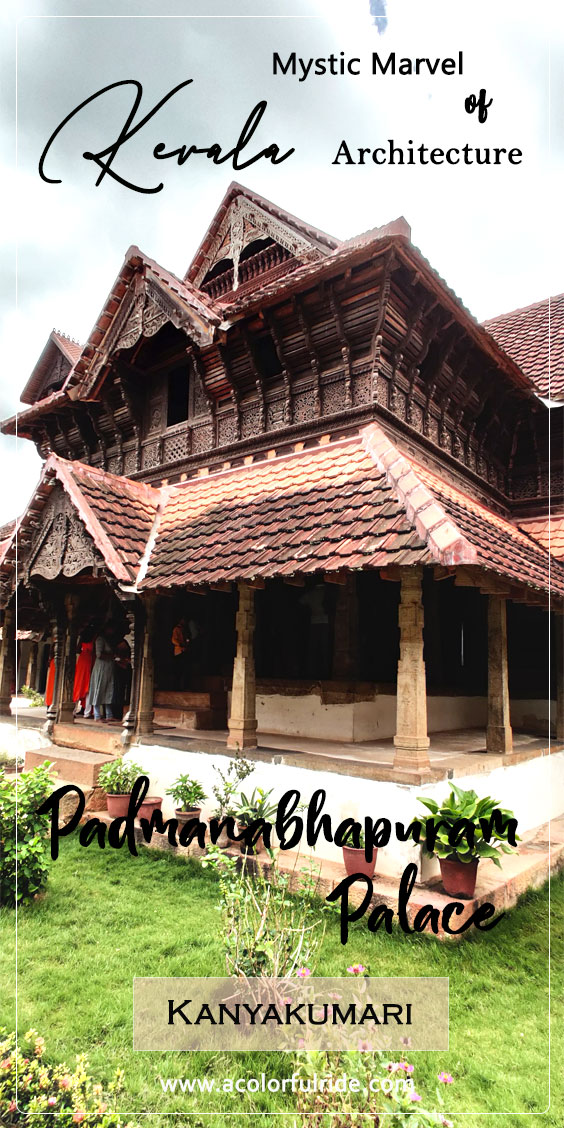 Mountains cladded in dark clouds and breezy wind makes your journey enticing and assert that there’s going to be a downpour.

On the way, you could enjoy seeing rubber plantations. Besides, every home dotted with lush greenery makes you feel energetic and lively for those coming from the mundane concrete world!! 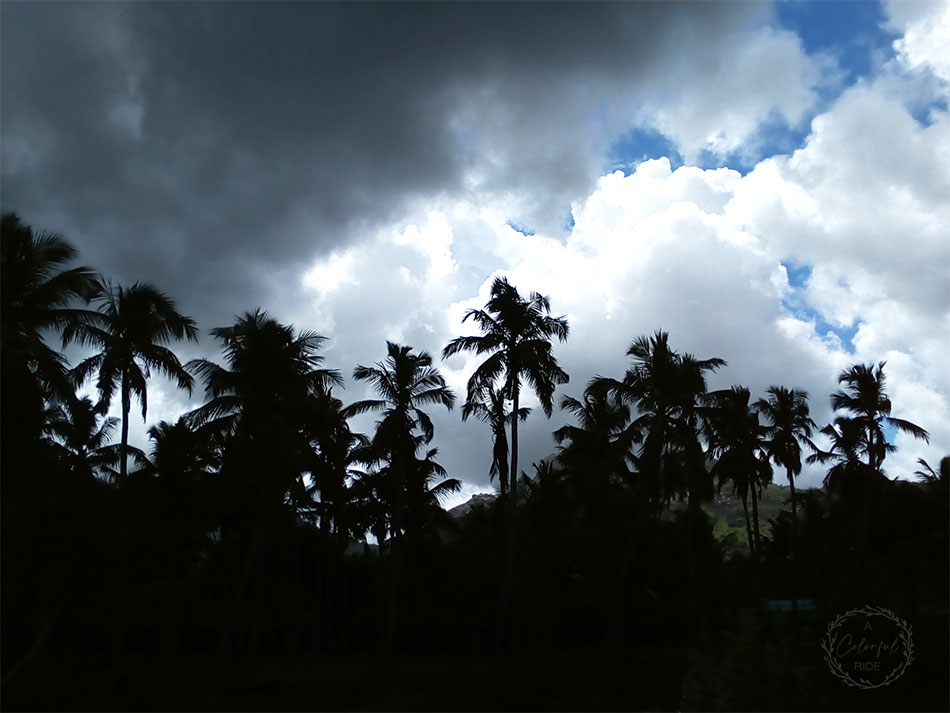 How to reach Padmanabhapuram Palace:

Nestled in the foothills of Veli, a part of  the Western Ghats, Padmanabhapuram Palace is an awesome historical – heritage place with its mystique architecture. Thus, considered the best-preserved till date in the borders of Kanyakumari under the administration of Kerala.

The fine wooden architecture of this place makes it untiring for tourists to flock here. It is in Padmanabhapuram, in the town of Thuckalay in Kanyakumari District, which is 20 KM from Nagercoil. 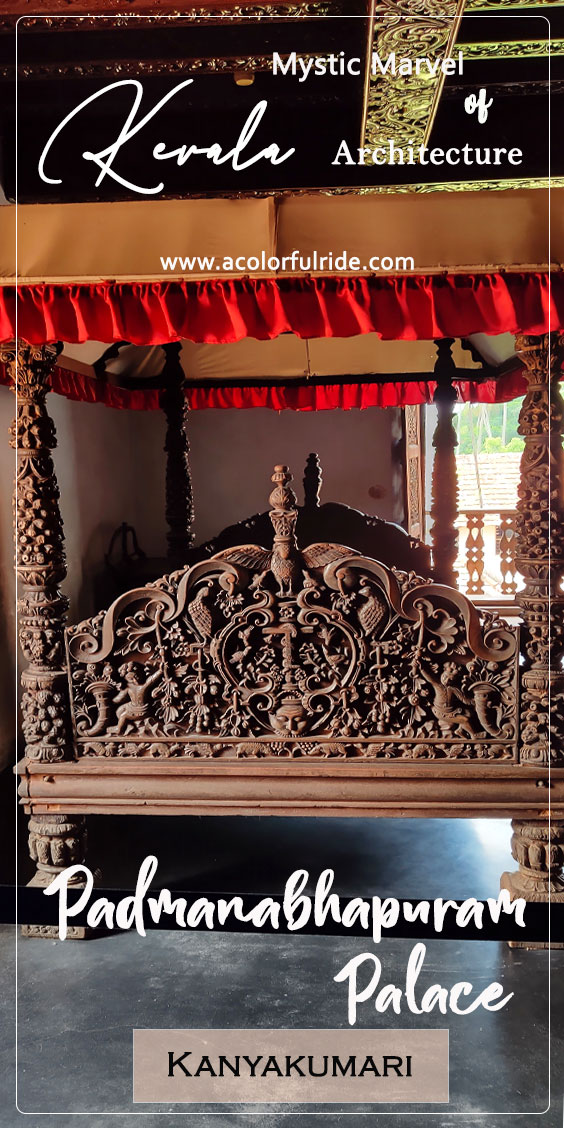 Padmanabhapuram Palace is an awe-inspiring work of Indigenous Kerala architecture and deemed as the largest wooden palace in Asia. It was built by Iravi Varma Kulasekhara Perumal in 1601 AD. Inexplicably, it offers an awesome sight to behold, with its large Mantrasala (King’s council’s chamber) and Thai Kottaram (Queen Mother’s Palace), Nataksala (Auditorium) and Valiya Oottupura, a double storied building, Thekkae Kottaram and Ambari Mukhappu.

Once the capital shifted to Thiruvananthapuram, it was left untouched and the palace lost its lust! When the flourishing kingdom of Travancore moved, it became a desolate place. However, today, the administration of the archaeological department of Kerala maintains it. 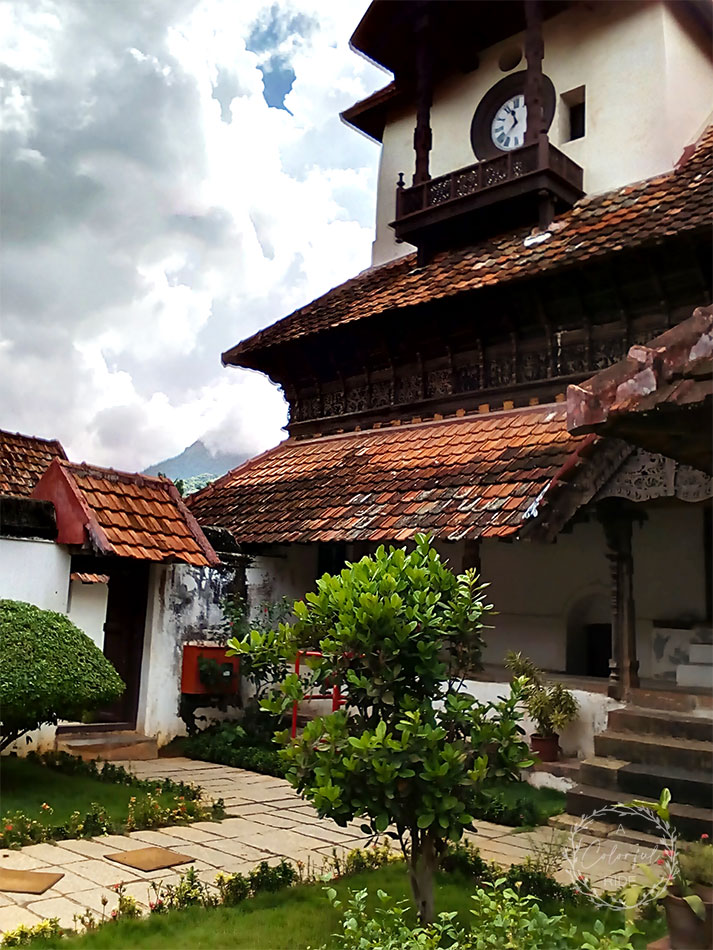 Lazz went to get the ticket and we left the footwear outside. That’s how we could share our part to keep it clean! Make sure to buy a ticket for cameras as well. Without that, you’d not be allowed to take any pictures… 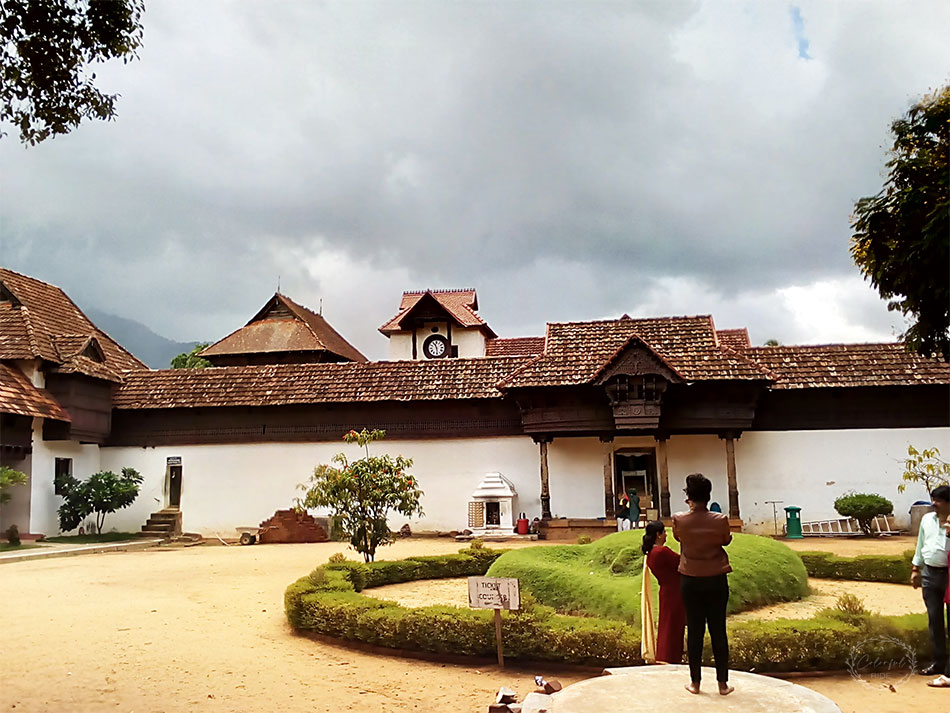 The first stop was at the entrance called ‘Poo Mukham’ (Portico of the building). And, the two wooden brackets with a soldier on horseback adjoining the stone pillar exhale the aesthetic architecture of Kerala to welcome you! And, we’re thrilled to see the 200-year-old clock still functioning in the adjacent clock tower. 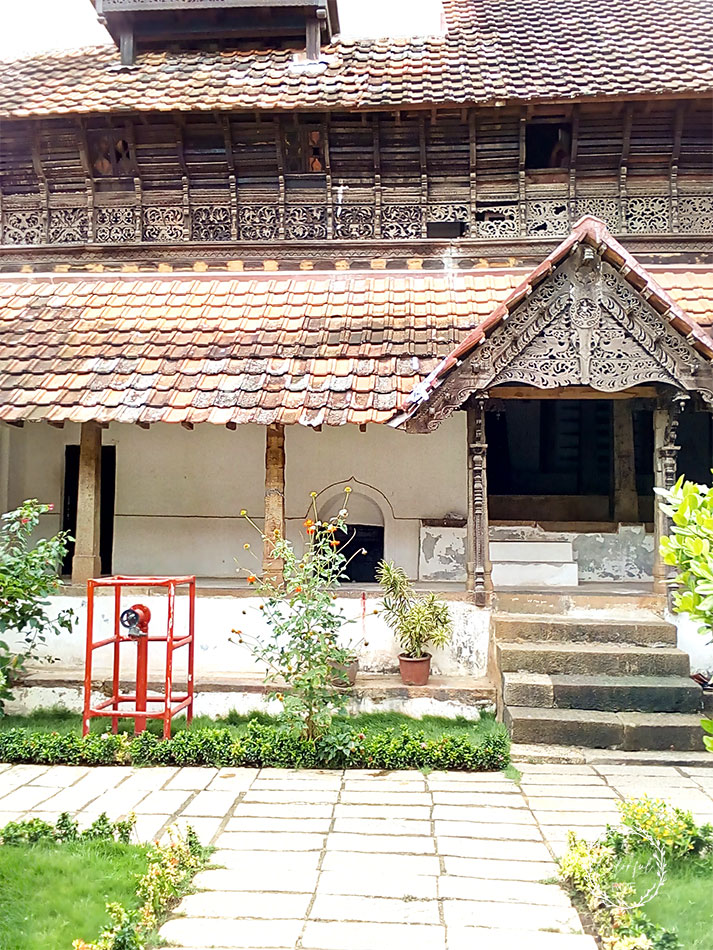 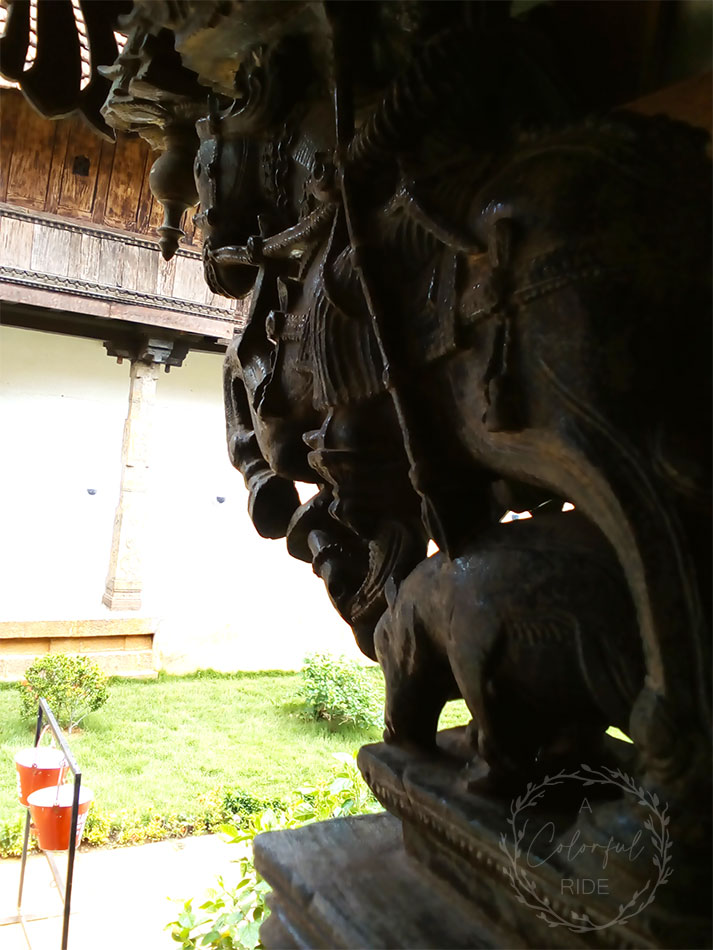 The most striking feature of Poomukham is the decorative sculptural work on the wooden ceiling. It is carved with exquisite lattice work of 90 different flowers, made out of rosewood & teak wood combination. Bewildered, I began to look closely at every floral motif…

The Brass Horse lamp (Kuthira vilaku) is another striking feature! It lets you rotate the lamp in the desired direction without oscillating it back.

You can also see an arm chair gifted by the Chinese, a granite cot, and a collection of onavillu, a bow-shaped instrument, as exhibits. 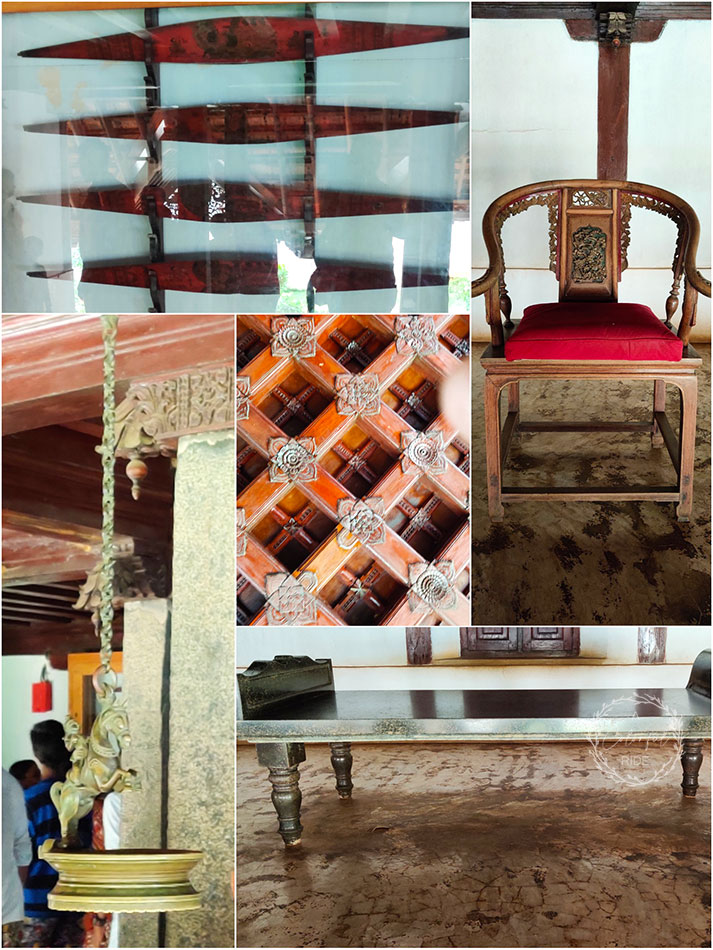 With intricate woodwork on the roof beams and polished floor, King Council’s Chamber emerges mystically in the faded light!

We merely walked through the palace, observing the architecture and listening to our guide narrate the history.

Valiya Oottupura, a double storied building located on the southern side of the palace, has been used for dining purposes during feasts  and it is a spacious area which could accommodate more than 1000 people at a time.

Moreover, you can spot large jars on the ground floor gifted by Chinese merchants to the King of Travancore.

The walls of Uppirikka Malika are beautifully adorned with Mural paintings of Lord Krishna.

Navaratri Mandapam was meant for conducting cultural programs during Navratri.

It is quite interesting to know that a mixture of lime, burnt coconut shells, tender coconut water, sand and other plant extracts along with secret ingredients constitutes floorings. It still retains its sheen till date!

I love the Kulappura in Thekkae Kottaram, which overlooks the pond. Who wouldn’t love a pool in their backyard? Wish, it’s maintained clean!

Ambari Mukhaphu at the east end of Thekkaetheruvu Malika is yet another masterpiece of attraction and craftsmanship of Kerala Architecture.  It’s a bay window, which resembles a howdah or ambari, to overlook the chariot races and address people during feasts.

Moreover, it took us an hour and a half to complete the entire palace. Additionally, there’s an archaeological museum on the left with exhibits of sculptures, stone inscriptions, ancient armories, and antiques from the bygone era. 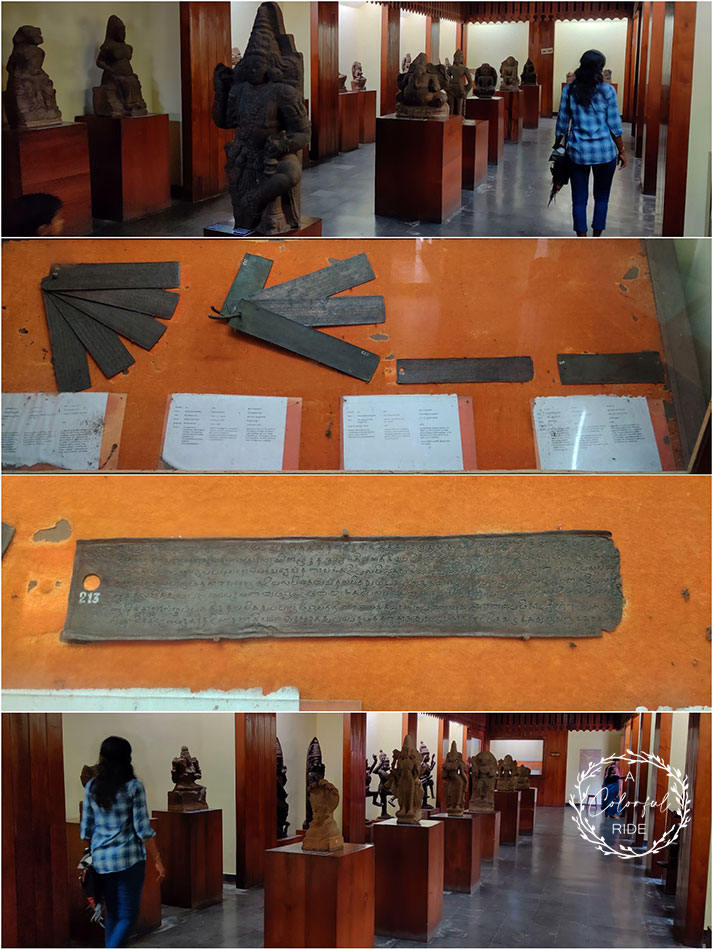 As we ended, it began to rain heavily. Therefore, we had to wait for 30 minutes in the museum before we could step out to board our cab.