Have you felt like falling down without actually falling? That’s how I felt when I walked over the bridge at Mathur Aqueduct.

We’re on the most renowned hanging bridge in South Asia, situated in Kalkulam taluk in Kanyakumari.  The natives call it ‘Thottipalam’. Mathur Aqueduct or Mathoor Thottipalam is 13 km from Padmanabhapuram Palace, hardly a 30 minutes’ drive. 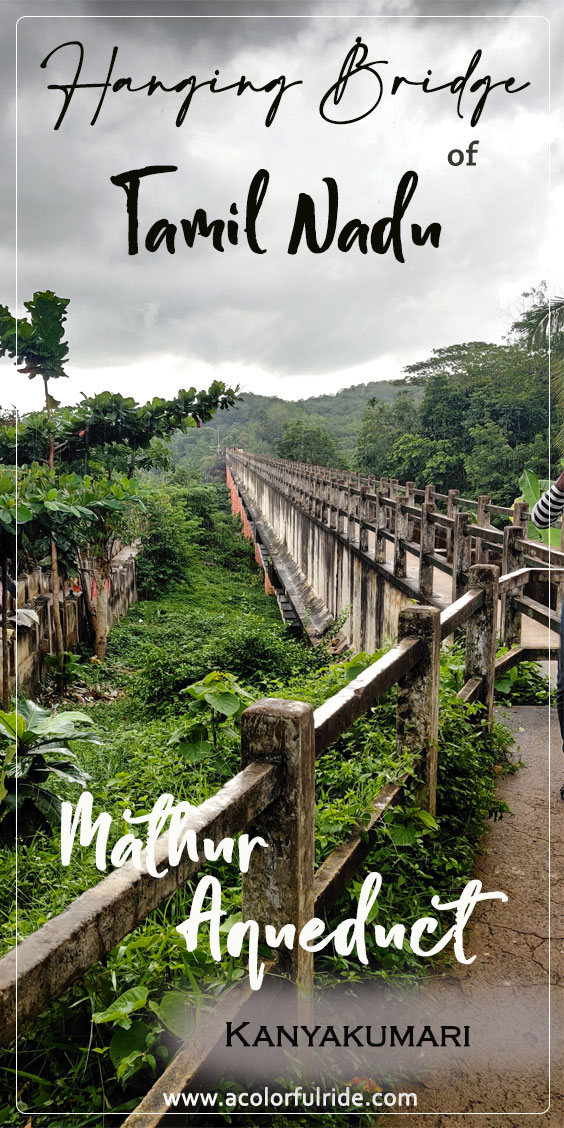 The foot hills of the Western Ghats are blanketed with lush greeneries and with thriving coconut trees on the banks of Parazhiyar, which flows down the bridge majestically, making it picturesque!

As I gaze endlessly into the horizon, my mind makes the connection instantly with the dark clouded trees of the Amazon Forests. 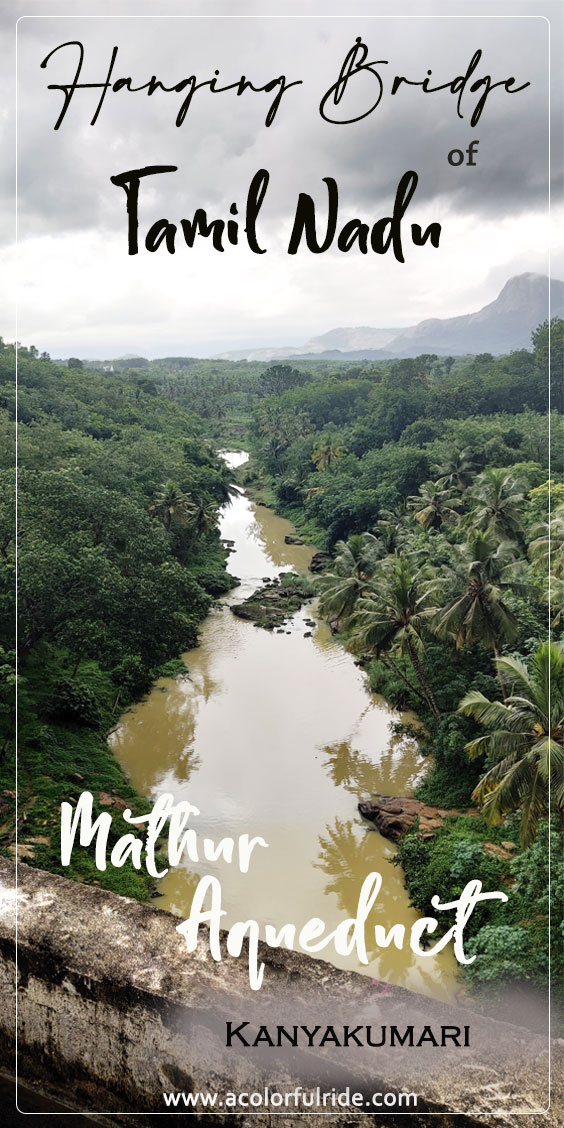 Take it slow, breathe and look far at the mesmerizing beauty of the place… It’s exhilarating and breathtakingly awesome!! 🙂

Reminiscing on our childhood days in Nagercoil, I’ve friends who would eagerly ask about the hanging bridge. I kept wondering why I’d not seen it so far. Add Mathoor Thottipalam or Mathoor Aqueduct to your itinerary as it is one of the top things to do in Kanyakumari. Do not miss it!!

It’s the longest and tallest trough in Asia. It was constructed over Parazhiyar in 1969 during the period of Hon. CM Kamarajar of Tamilnadu to resolve the water problem and carry water for irrigation across the hill. The concrete bridge is 1240 Ft. long and 101 Ft. tall, supported by 28 pillars.

We drove along the road passing to the uppermost aqueduct and it got difficult to park the car as there was no parking available. Lazz went to get the tickets, but I was distracted by the laneway shops filled with eatables. I bought some pick pineapples and water-apples at a much cheaper rate! 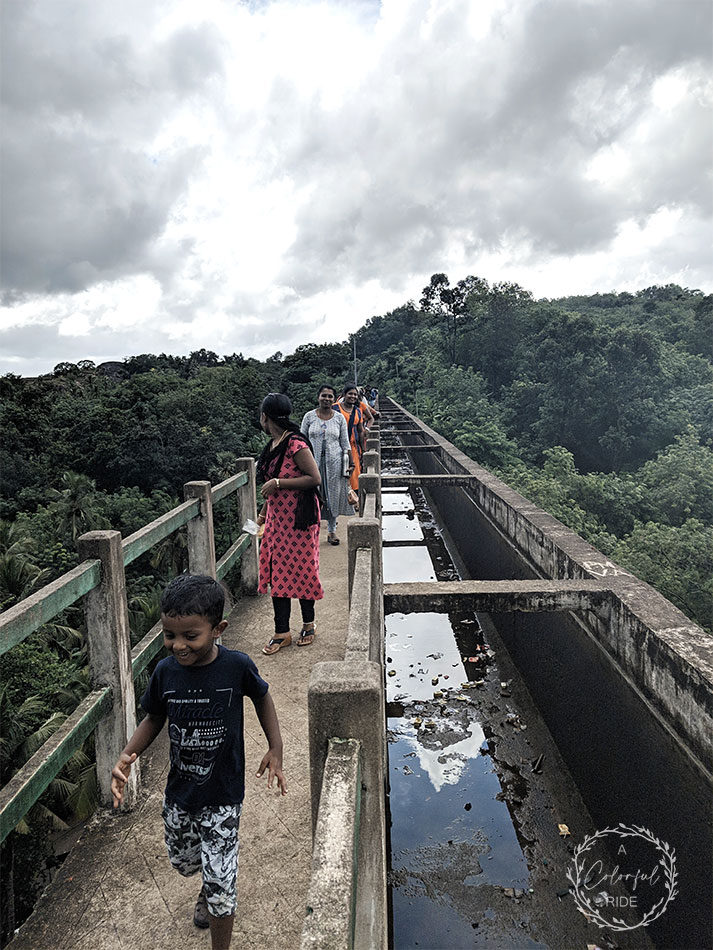 As we walked along the bridge, we had to hold the kids’s hand to keep them close to us.  As few of the bridge guard railings are broken and widespread. In a few steps, we saw the canal filled with all the possible trash and there was no water flowing in it. It’s so disappointing!!

It was quite disheartening to see the bridge in poor condition due to lack of maintenance. At mid-way, my aunt suddenly felt giddy and we had to quickly move to the abutment. We all had some lemonade in a shop at the other end of the bridge.  From there, we took the stairs to go down the bridge!

There’s another road passing through the foot of  an aqueduct where the river flows down the bridge… We saw people bathing in the murky river water. The dark clouds had come down and it started to drizzle.  Therefore, we decided to move from Mathur aqueduct to Thirparappu Waterfalls.

Mathoor Thottipalam is the favorite weekend retreat in Nagercoil for locals. Go early to take off from the rabble! 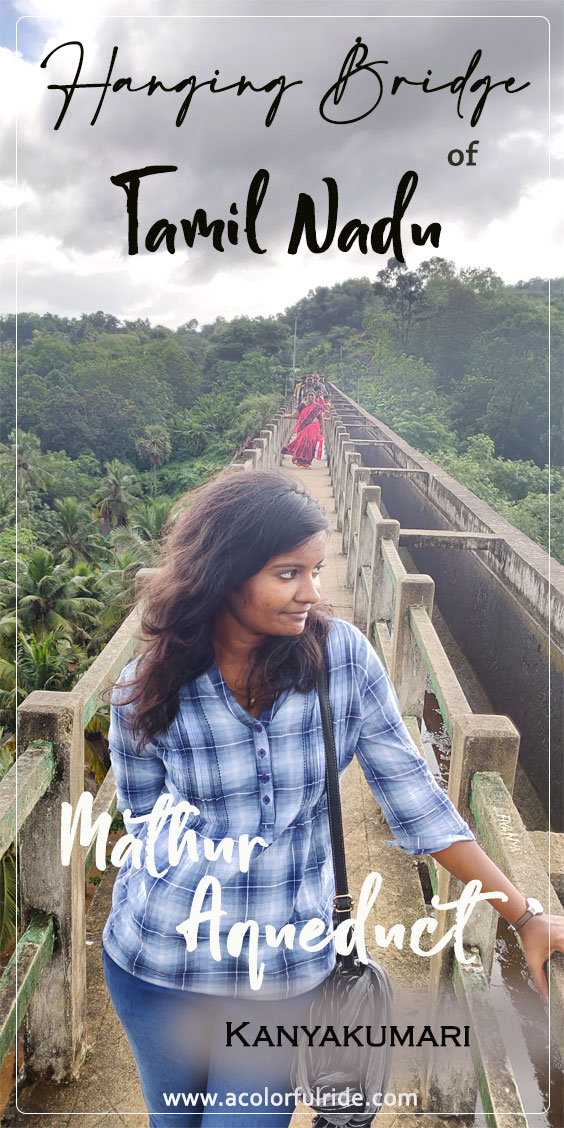 If you’re acrophobic or with vertigo ailments, then it’s better to take a glimpse of the beauty of the hanging bridge from the foothills.

Take a look at our first day trip to the renowned Kappal Matha Church and Uvari Anthoniyar Church. The radiant facade of Punniyavalanpuram Velankanni Church, the lost church of Athisaya Manal Matha and the miraculous ThiruKalyana Matha Shrine behold the perfect goodness of God! Mesmerizing beauty of Manapad with blue lagoons and natural aquifers is really splendid!

TOURIST PLACES IN KANYAKUMARI – THE REASON WHY EVERYONE LOVE IT !!